a 39 mile walk from Liphook to Chichester Harbour

This is a delightful walking trail linking Liphook with Chichester Harbour.

It was first conceived in the 1980’s by a group of Liphook Ramblers who devised a route from their home town to Chichester Cathedral.

It was brought to life in 2008 when Keith & Sally from ‘Footprints of Sussex’ received a small grant from West Sussex County Council to waymark the trail and produce a simple trail guide.

They took the opportunity to extend the route southwards down to East Head at the entrance to Chichester Harbour and to re-route it through a pretty section of the Rother Valley.

The trail guide has since been upgraded to take advantage of a new permissive path around Midhurst.

Ordnance Survey now show the trail on their Explorer Maps  and it is much easier to follow. 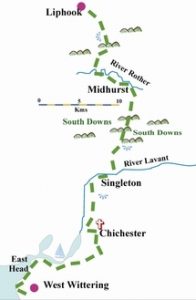 A little about the trail:

This delightful walking trail follows existing rights of way over its 39 mile/62.4 kilometre route from Liphook, on the Hampshire/West Sussex border, to East Head at the entrance to Chichester Harbour through the heart of the South Downs National Park..

Being aligned north-south, it crosses all the main geologies of West Sussex from the greensand ridges, through Wealden river valleys and heathlands, to the high chalk downland and the coastal plain. In so doing it offers a great variety of scenery, flora and fauna.

The trail logo reflects this by depicting the South Downs, the River Rother and Chichester Harbour.

It can be walked energetically in three days, bearing in mind that the total ‘climb’ is around 650 metres/2,000 feet. The maps divide it into six sections, which although unequal in distance, break the route into stages that allow the possible use of public transport.

There is a good choice of accommodation and restaurants in Liphook, Midhurst and Chichester, elsewhere there is a smattering of pubs and B&B’s – although the northern section is a little sparse in that respect.

You will need two Ordnance Survey Explorer maps to cover the route; numbers 120 & 133: the trail is clearly shown as a ‘recreational route’ on both.